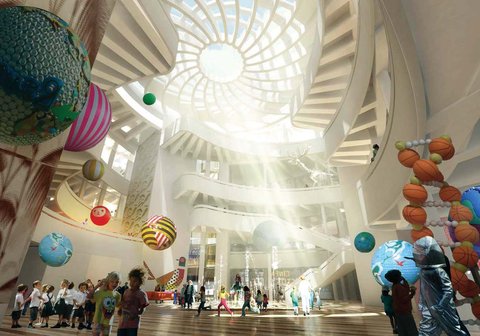 As institutions, museums have the ability to educate and inspire visitors—not to mention brighten a city’s cultural landscape.

To get the doors open and the visitors in, though, project teams have some major obstacles to overcome. In most cases, that involves accommodating cutting-edge design demands—though project managers leading these efforts have been known to contend with everything from flood recovery to violent political uprisings.

The project to build the Massar Children’s Discovery Center in Damascus, Syria has one primary goal: to reach as many of the country’s 7.9 million children as possible.

The Syria Trust for Development is sponsoring the project, with a budget of €70 million.

“It’s unique in its aim to reach so many children,” says Martyn Best, CEO of the project management consultancy Cultural Innovations in London, England, which headed up the effort. “I’ve never seen anything like it.”

The Danish firm Henning Larsen Architects drew up a striking design—a 16,000-square-meter (172,223-square-foot) facility resembling a rose. But the team didn’t want that design to take precedence over the other features of the project.

“The biggest challenge we face is this desire to have an architectural icon that complements the experiences within it,” Mr. Best says. “It was very much a building that responded to the content, rather than the other way around.”

That directly affected how he managed the operational and exhibition master planning.

“The content development of the Discovery Center was established six months ahead of the architecture, and the two then progressed as a creative ‘dialogue.’ The gallery spaces, visitor flow and openness all expressed and supported the ideals of connection between people and that dialogue,” he says.

Using a process called interpretive planning, the project team set about to understand the audience—both the Syrian educational curriculum and the client’s objectives. The team came up with descriptions of the objectives, the exhibits and how they deliver the requirements: the number of distinct exhibition spaces, how they relate to each other and the sort of experiences they provide.

Only then could architectural design begin.

“What we needed to avoid was trying to fit an exhibition into a predetermined architectural space, which is never satisfactory and often a disaster,” Mr. Best says.

The revolt against the authoritarian regime of President Bashar al-Assad could delay the project, which was scheduled to wrap up this year. The uprising has prevented Mr. Best’s team from traveling to Syria, forcing it to work virtually and await discussion of when work onsite will be reinitiated.

When the city-owned Anchorage Museum in Anchorage, Alaska, USA received a US$50 million gift from a private donor in 1999, the planning committee came to a quick consensus: create an 80,000-square-foot (7,432-square-meter) expansion to the existing structure, as well as a planetarium, gallery, children’s discovery center and arctic studies center.

A not-for-profit Museum Building Committee (MBC) was formed with 18 volunteer members to raise the extra money needed (the total budget for the project was US$106 million) and hire the design team.

The MBC decided it wanted a star architect working on the project and selected Briton David Chipperfield from a pool of 40 applicants.

The project broke ground in late 2006. Due to the extreme climate in the remote, subarctic city, quality control and maintaining the construction budget rose to the forefront.

“In Alaska, with short summers and material procurement challenges, you tend to need to build quickly, and it has to be technically very good,” says Daphne Brown, project manager for Kumin Associates Inc., the local architectural firm hired to manage the project. “You have to do it on pace because of the owner’s schedule, harsh environments and the costs up here.”

All equipment and construction material (except concrete) had to be trucked in or shipped by barge and container ships. One scheduling slip-up that leads to missing the barge means you miss the entire construction season, Ms. Brown says.

For this project, the glass came from Germany, then was shipped to China for fritting and assembling the facade into exterior panels. Those panels were then shipped to the project site, having to pass through customs in Seattle, Washington, USA.

Ms. Brown created a precise construction schedule to ensure that any necessary digging was performed during the warmer months. Her team also worked closely with Mr. Chipperfield’s firm to make certain that its designs were feasible for the local climate.

In addition to climate concerns, mediating conflict was a priority. Ms. Brown established buy-in by involving everyone from the start of the project. The contractor and his team, for instance, attended design meetings and workshops, and provided invaluable input on constructability and procurement issues.

“You can’t let your ego get involved when you’re trying to do a project like this,” Ms. Brown says. “That doesn’t mean we didn’t have disagreements, but we all talked about it as a team and everything was done very thoughtfully.”

The twist to the Carpathian Troy Open-Air Museum project plan was that it wouldn’t involve a central building. As its name suggests, the museum in Trzcinica, Poland is a mainly outdoor affair.

The 20-acre (8-hectare) site, scheduled to open midyear, offers a chance to visit a restored medieval village built on a 4,000-year-old archeological site housing the ruins of a Bronze Age defensive settlement.

The project broke ground in October 2007, and by June 2010, it was well on its way to opening on time and within its €2.6 million budget.

Then came the rains. Floods as high as 6 feet (2 meters) ravaged the country a month before the scheduled opening, and the site was demolished.

The project team had to secure additional funding to rebuild, says Dawid Iwaniec, manager at the museum. Insurance benefits only covered part of the restoration, so special funds were eventually made available through the Polish Ministry of the Interior and Administration.

Mr. Iwaniec was also faced with the challenge of rallying disheartened operations staffers afraid of losing their jobs in the wake of the catastrophe. “Our employees were assured that there was plenty of work to do— but they should be prepared to perform duties that would slightly differ from working as guides and office staff, like making reconstructions of ancient items,” he says.

This, of course, led to some swift training, but the museum staff took to it well, according to Mr. Iwaniec.

The project plan called for historical accuracy, which meant that all of the museum’s elements had to be built exactly where they had been excavated at the sites.

On top of that, the project team couldn’t rely upon modern technology.

“All cottages needed to be done according to ancient methods and using ancient tools. It wasn’t easy to find a company capable of doing that,” Mr. Iwaniec says.

Restoration efforts, which ballooned the budget to €3.6 million, launched last October, and the project team was able to meet its rebaselined goal.

Calling in the Experts

Some people hang their art on the walls of their home, but billionaire Carlos Slim Helu is showcasing his impressive collection in a museum that’s free to the public.

Fernando Romero (Mr. Helu’s son-in-law) designed an ultra-modern building with a sinuous exterior at a cost of US$70 million. To meet the unusual design requirements in the project plan, Mr. Romero tapped U.S.-based engineering firm Arup, as well as Gehry Technologies, which was started by Frank Gehry, an architect renowned for his avant-garde museum designs. The outside expertise helped the project team work its wonders— especially when it came to the 16,000 hexagonal aluminum plates arranged in a complex, computer-designed honeycomb pattern. “We curl steel plates into tubes and then we give the right curvature to each of them,” Mr. Romero told Bloomberg. “Each column has different properties, depending on the weight of the building that it will be supporting.”

The eye-popping museum opened in March.